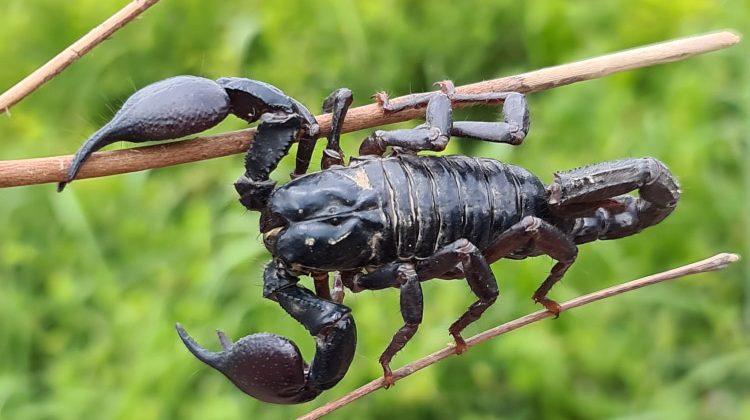 Within the arthropod invertebrates, the class of arachnids includes the order Scorpiones, commonly known as scorpions or scorpions. Yes, you read that right! Scorpions and spiders share the same class since they are evolutionarily related.

To get into the subject, from AgroCorrn, we will teach you the different types of scorpions, and we will make a brief review of the families that make up the order. So if you want to find out how many types of scorpions there are and what they are, read on!

How many species of scorpions are there

Throughout the planet Earth, there are around 2,000 species of scorpions grouped in 13 families. All of them are characterized by presenting specialized venom to obtain the greatest effectiveness when catching their prey, but there is no need to worry. Only between 30 and 40 species of those 2,000 are scorpions so poisonous as to be capable of cause death to people, and the rest can cause some allergy or poisoning.

One of the types of scorpions from Argentina is the genus Tityus, particularly Tityus argentinus. Its appearance is easy to distinguish: dark gray body with yellow or brown limbs. Concerning its venom, it presents neurotoxins that affect the nervous system of its prey, even that of humans. However, it is not an aggressive species, and it only bites to defend itself.

The Morelos scorpion ( Centruroides limpidus ) is one of the most poisonous scorpions in Mexico and the world. The Morelos scorpion sting causes severe problems in the respiratory system of people. It can measure up to 12 cm and has a brownish coloration, mainly in its pincers.

One of the most typical scorpions in Spain is the common yellow scorpion ( Buthus occinatus ), which is also distributed throughout Italy and France. Its name precisely refers to its appearance since it has a yellowish coloration although darker on the body. Regarding its poison, although it is of medium danger, it can be lethal for children and the elderly. 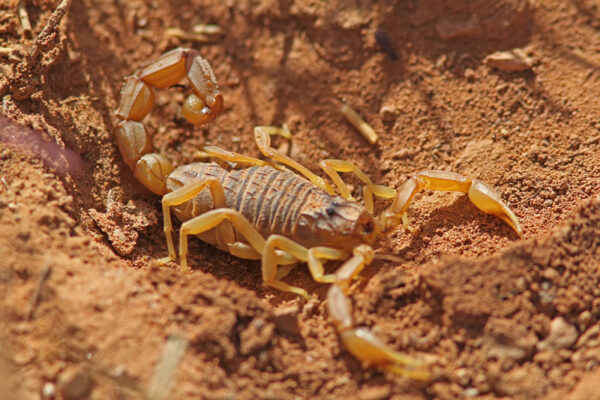 This black-tailed scorpion ( Androctonus bicolor ) not only has a black tail, but its entire body is dark in color and robust in appearance. Its distribution includes Africa and the Middle East, and its powerful poison affects the nervous system and can be lethal.

The emperor scorpion ( Pandinus imperator ) is one of the largest scorpion species in the world. Its body is robust, dark in color, and measures approximately 20 cm. Regarding its distribution, it is endemic to West Africa. Often, this species is commercialized in the pet market because its venom is mildly harmful. It does not cause major complications unless the person is allergic.

The peculiar name of the thick-tailed spitting scorpion refers to the fact that this species can launch its venom at long distances, causing temporary blindness and eye damage. This scorpion ( Parabuthus transvaalicus ) is found in the southeast of the African continent and can reach more than 15 cm.

The Bothriurus bonariensis or Buenos, Aire’s scorpion, is often found in Argentina, Uruguay, and southern Brazil. Its body is of medium size, and its bite is not lethal to people. In fact, sometimes, the stinger does not even penetrate the skin.

Other types of scorpions

As we mentioned earlier, there are 13 families of scorpions. Next, we will mention each of them, and we will list some of the group’s species.

This family has more than 800 species distributed around the world, except New Zealand and Antarctica. Some examples are:

Within this family, made up of 158 species, are scorpions from tropical and temperate climates of the southern hemisphere. Among them, we mention:

Made up of 23 species, all of them have in common the presence of sensory hairs on their body, which is why they are often called hairy scorpions. As an example, we mention:

With approximately 170 species which are distributed by the United States, Central America, and South America. Among them, we name:

It is a characteristic family of South Asia, with approximately 20 species. Some of them are:

They are characterized by being harmless scorpions. There are 59 species, and the best known is Megacormus grubbsi, the short-tailed scorpion endemic to Mexico.

The approximately 100 species of this family, grouped into 12 genera, are characterized by the large size of their bodies, which reach 20 cm in length. The best-known genus is Opisthacanthus, whose species are found in America and Africa. Some of them are:

Species typical of the United States and Asia belong to this family. Two of them are Calchas anlasi and Calchas nordmanni.

It is a family made up of few species with light, long and fine bodies. The species are:

With more than 260 species grouped into 16 genera, this family is characterized by the large size of the bodies, reaching 25 cm in length. As an example, we mention:

Made up of only 10 species, this family is distributed throughout North America. The most characteristic species is Superstitionia donensis

This family comprises more than 170 species, which are found in North and Central America. The most emblematic genus is Vaejovis, and some of its species are: