The carbon cycle: what it is, how it works and its importance 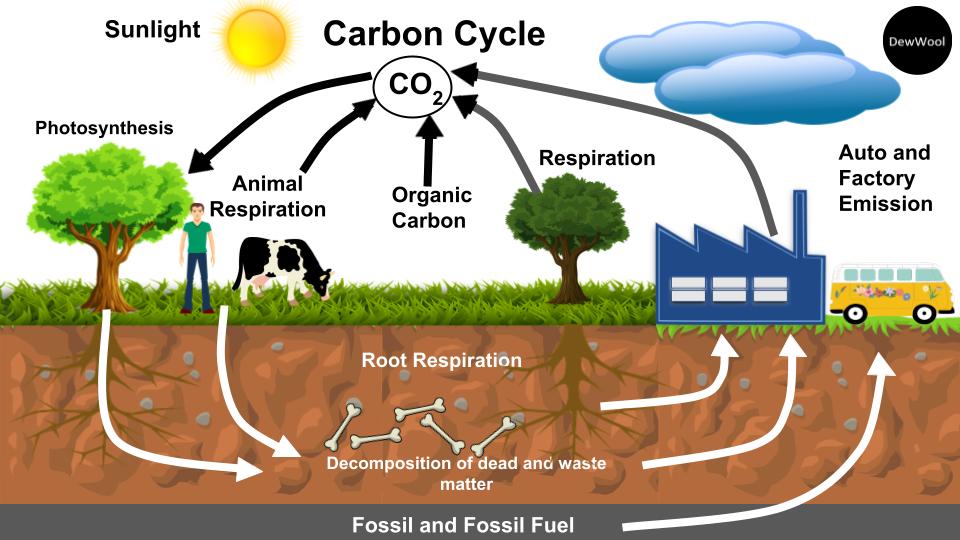 We have reached a point where no one doubts that we are addicted to fossil fuels. Our peculiar style of production and consumption directly interferes with the carbon cycle; increasing, as a collateral effect, climate change. According to the law of conservation of matter, matter is neither created nor destroyed, it is only transformed, and in each transformation a slight percentage of energy is lost in the form of heat, so carbon does not stop recirculating for thousands and thousands of years.

What is the carbon cycle and its scheme

As a summary of the carbon cycle , we can say that this is a biogeochemical cycle in which the movements of carbon through the biosphere, lithosphere, atmosphere and hydrosphere are described. Carbon is one of the most abundant elements on Earth.

The cycle is subdivided into the biological cycle of carbon and the biogeochemical . In the first, the biosphere regulates exchanges with the atmosphere, through photosynthesis (carbon retention) and respiration (carbon return). While in the second, the exchange of CO2 through the biosphere and the rest of the subsystems is controlled. Later on we will delve into what the carbon cycle consists of , but here below and in the cover image you can already see a diagram of the carbon cycle .

How the carbon cycle works

The carbon cycle can be divided into the following parts: production, synthesis and fixation. Production is based on processes that emit carbon. Synthesis is the removal of carbon from the atmosphere and transformation into more complex molecules. Finally, the part of the fixation is where this element is trapped.

In the production of carbon, the biosphere exhales CO2 in the process of respiration ; and in those of decomposition and fermentation it expels CO2 and CH4. On the other hand, the hydrosphere emits the CO2 that it has dissolved when the temperature increases, due to thermal variations. Likewise, the lithosphere releases CO2 during volcanic eruptions by releasing the carbon present in minerals and rocks.

The synthesis is carried out by photosynthetic organisms (plants, algae and certain bacteria). During photosynthesis , the combination of CO2, water and light energy is transformed into organic matter and oxygen. In this process, inorganic CO2 is transformed into an organic compound that is more assimilable to living beings. On the other hand, the formation of the earth’s crust through limestones and dolomites in shallow waters, due to the accumulation of organic skeletons, also ends up removing carbon.

Fixed carbon is stored in carbon sinks . These are natural or man-made deposits that capture and store carbon from the atmosphere. Within the natural ones are the oceans, plant and animal biomass, permafrost , limestone sedimentary rocks (geological carbon cycles) and deposits of fossil resources (coal, oil, natural gas and methane hydrates). Destruction of these deposits increases the concentration of carbon in the atmosphere.

Dissolved CO2 in the hydrosphere is best stored at low temperatures. The oceans are considered the biggest carbon sinks, even more so than the Amazon! The lithosphere retains much of the carbon in it through calcareous and carbonaceous rocks. In it are the fossil fuel deposits. These deposits take thousands of years to form and we are extracting and using them at a speed that does not give the Earth time to regenerate them, in addition to adding CO2 to the atmosphere by burning them.

You may also be interested in knowing how coal is formed

The importance of the carbon cycle

Once you have reached this point, it is normal to wonder why the carbon cycle is important. As already stated before, it could be concluded that carbon is vital for the functioning of the biosphere and for regulating the Earth’s climate . Here you can read more about What is the importance of carbon for living beings .

However, when the natural carbon cycle is altered and its presence in the atmosphere increases, among other things, the greenhouse effect worsens. In this link you will learn the Difference between natural and artificial greenhouse effect .

How man intervenes in the carbon cycle

The carbon cycle, like the rest of biogeochemical cycles, is a closed matter cycle. However, the anthropogenic influence associated with industrial activities has opened the cycle, in addition to accelerating it, through the combustion of fossil resources. This fact affects the principle of sustainability on which ecosystems are based, which is to recycle the matter as much as possible and not to produce non-assimilable waste at a harmful rate.

Through the combustion of fossil fuels, CO2 is emitted into the atmosphere at a rate that photosynthetic organisms cannot assimilate and retain. It was a carbon that was retained in the lithosphere and now accumulates in the atmosphere , increasing the greenhouse effect . In addition, global warming causes the oceans to increase in temperature. CO2 is a gas that dissolves better in cold water, so if the oceans increase in temperature, they will begin to release more CO2 into the atmosphere, fostering a positive feedback loop. As you might expect, deforestation Massive performance by humans also affects all of this, by reducing the volume of plant biomass sinks.

Now that you have learned more about the carbon cycle, we recommend this other post on What is blue carbon or blue carbon .

previousFall Equinox 2020: Northern and Southern Hemisphere
nextWatersheds: what are they, types and importance
Related Posts