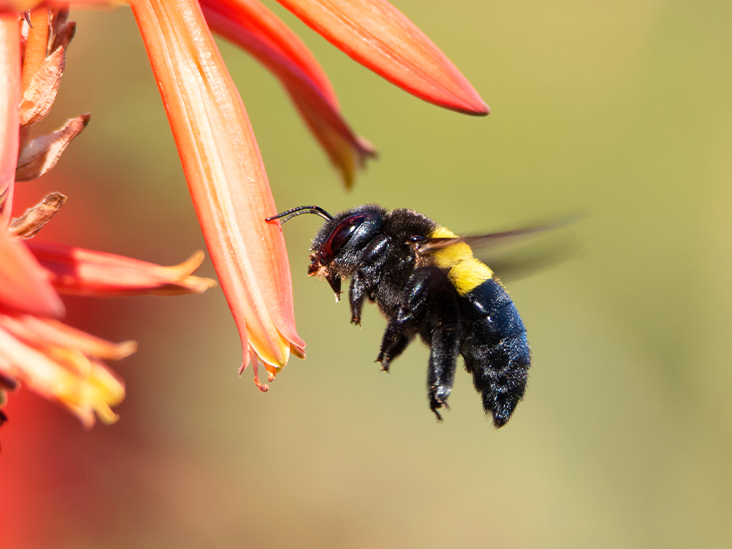 Bees are a group of insects that arouse a lot of curiosity. Their social behavior and their ability to organize themselves within the hive are surprising and are study material for many researchers. However, their interest lies not only in their behavior, but also in the role of bees in nature and the benefits they provide to humans.

Are you interested in learning more about bees? Then stay reading this AgroCorrn article in which you will learn the function of bees in nature, the types of bees and the more specific function of each one and its vulnerability to extinction.

What is the role of bees on the planet

To begin with this section, we must understand that bees have mutualistic relationships with plants, this means that bees and plants interact with each other and both parties benefit. These benefits are essential for their existence: the bees obtain nectar from the flowers , which they will then use to produce honey , and at the same time they allow the pollination of the flowers , since pollen remains on their bodies and, thanks to the large number of Visiting flowers carry pollen from one flower to another, that is, they are pollinating insects .

The great importance of bees in the ecosystem is often talked about , and this is because a large part of plant biodiversity depends on the pollination of bees , so that the presence of bees contributes to stability and balance of ecosystems.

We recommend you get to know them better with this other article on the Characteristics of bees and also learn more about their vital role for the planet, and of course for those of us who inhabit it, by reading this other post on The importance of bees or by watching the video on this topic that we leave you here below.

The role of the queen bee

As you know, not all the bees that make up the hive have the same function. In this section and in the next ones, you will learn about the functions of bees in the hive and we will also see the main characteristics of each one of them. We will start with the description of the queen bee . This bee is the only fertile female in the hive . It is easy to identify because it has a larger size and a long abdomen. However, the times that it leaves the hive are counted.

With regard to its tasks or functions, the queen bee carries out two basic functions that allow the hive to exist:

The role of worker bees

You’ve probably already heard of worker bees. These are infertile females since their reproductive systems are not functional. However, they can become functional in the absence of a queen bee. Regarding their appearance, they are considerably smaller than the queen bee.

Within a hive there can be more than 10,000 worker bees and throughout their life they carry out different tasks, which vary according to their age or the needs of the colony. Let’s see here the main functions of worker bees :

The role of drone bees

After reading the previous section, you may wonder what role drone bees perform . They are male bees and therefore their main function is to fertilize the queen bee . During fertilization flights or nuptial flights (one of the only times that the queen bee leaves the hive), the drones of a hive copulate with the only queen. The curious thing about these flights is that after copulation the drones die as their reproductive system is detached.

Drones differ from other types of bees because they originate from unfertilized eggs that are deposited in cells larger than the cells of the workers. Regarding their appearance, they can be distinguished by their large eyes, their larger size compared to the workers, but smaller than the queen, and their noisy flight.

Bees in danger of extinction

As you can imagine, the benefits that bees bring to human beings are multiple: they generate natural products such as honey, wax, jelly and more with a strong economic impact, they are essential for the cultivation of many plant species from which we feed and their Presence favors plant biodiversity and, ultimately, the balance of ecosystems . Despite this, bee populations are declining. Both native bees from different areas and honey bees (genus Apis ) are very sensitive to changes in their environments. Thus, the loss of habitat, climate change, the excessive use of pesticides such as neonicotinoidsor other chemicals and the introduction of exotic pollinating species are accelerating the process of decline in bee populations and, in fact, many species today are at risk of extinction .

Fortunately, there are small actions in our daily lives that can help bees not become extinct. So here we will tell you how you can help bees :

We advise you to read more about this topic with this other post about Why bees are in danger of extinction , as well as watch the video that we leave you here. Also, if you want to know more curiosities about bees, do not hesitate to learn How bees make honey with this other article.

previousWeathering: what is it, types and examples
nextPhotosynthesis: what is it, process and importance
Related Posts