Is the praying mantis poisonous? 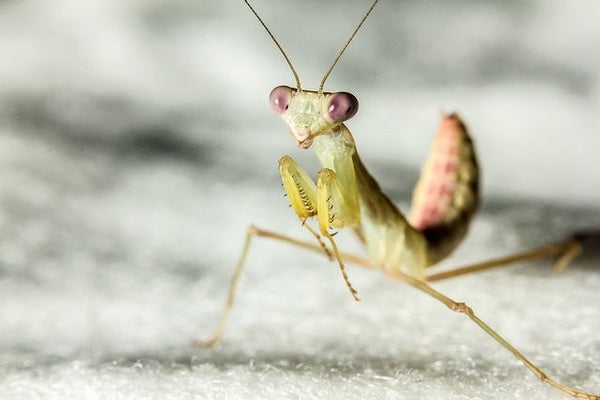 Many times we come across certain insects that give us respect and even fear because of their appearance, even though we don’t know much about them. This may be the case with the praying mantis. The praying mantis is a hexapod arthropod belonging to the mantid family. Its name “mantis” comes from the Greek and means prophet and religious comes from its typical praying position of its front legs, especially in the European species Praying mantis (or commonly in English ” praying mantis “). It presents cosmopolitan habits and, therefore, it is possible to find it in almost every country in the world. However, it is not easy to detect it in nature, as it has a characteristic that allows it to camouflage itself ( mimicry) and be almost imperceptible in some moments, although if we wanted to make an effort and find some, it would be easier to do it in summer, since it is the moment of its life cycle in which it reaches the adult state. The biomes in which the mantises are found are usually wooded areas or grasslands and tend to have a rather sedentary behavior.

There are many singularities that characterize these insects and, as we said before, due to their appearance they generate a sensation of alertness in many people, because seeing their claws and their striking color there are those who wonder: is the praying mantis poisonous? You may even have heard something about the “venom of the praying mantis”, but if you are interested in clarifying this curiosity and discovering many more about these insects, keep reading this AgroCorrn article in which we clarify everything.

Is the praying mantis poisonous or not?

Mantises are arthropods , more specifically insects , and like the vast majority of these animals, they raise many doubts and questions, since they are very different from us and other animals with which we interact more.

Other common doubts are whether the praying mantises bite or what the praying mantis bite is like. The truth is that they cannot sting either because they do not have a stinger or anything similar. If they did bite, their jaws are so small that we would hardly know.

We recommend you learn more about what insects are and their characteristics by reading this other post.

Currently, there are a total of 2,500 species of mantis distributed throughout 24 families and 430 genera. Most frequent the tropical areas, but there is also a part that is found in temperate areas. Each species has different morphological characteristics in terms of shape and size, as well as behavior, in fact, some become pets! In general, the most studied has been the European praying mantis ( Praying Mantis ), they are green and almost always have a white spot on the inside of the front legs. Here are some of the different species or types of praying mantises that exist today and some of their most significant characteristics.

Below you can see the images of the praying mantises in this list in the same order, starting with the European one.

Other curiosities of the praying mantis

After having clarified that praying mantises are not poisonous , to finish discovering more about these species, here are some more curiosities:

previousAre algae plants?
nextWeathering: what is it, types and examples
Related Posts