Baobabs: what are they and characteristics 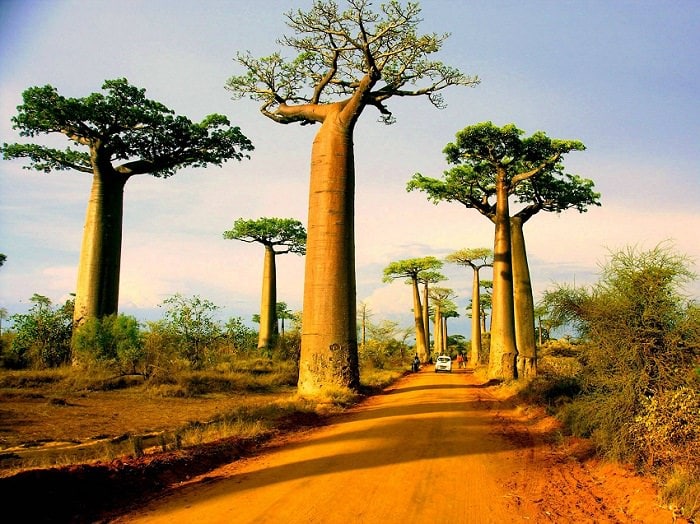 Revered by native African peoples and famous for works of literature such as The Little Prince, baobabs are trees surrounded by solemn majesty that is awe-inspiring and hard to forget. Their enormous proportions, their unique appearance in the world and their almost mythical longevity make them some of the most impressive vegetables on our planet.

If you want to learn more about what type of tree the baobab is, join us in this AgroCorrn article in which we will travel in search of one of the largest trees in the world. Find out what baobabs are and their characteristics , as well as a gallery of baobabs images , below.

What are baobabs and species

Its scientific name is Adansonia , the genus that includes the 8 species of baobab, all belonging to the Malvaceae family. It is also known as monkey bread or tree planted upside down , and legend has it that it was such a highly conceited tree that a god turned it over to punish it, hence its unique appearance, in which it seems that the highest part of the tree are its roots, and that the crown is buried.

The baobab tree has a tropical or subtropical climate in all its species, since they all belong to semi-arid areas of Australia, Madagascar and Africa, the best known being the African baobab. These are the baobab species :

This is the specifically called monkey bread, a tree with a massive trunk native to the south of the Sahara and also the best known of the baobab. It reaches heights of up to 25 meters , but the most remarkable thing is its trunk, with a circumference that can exceed 40 meters . Its flowers are large and white, giving rise to fruits that are reminiscent of small melons.

This is the baobab that reaches the highest height, reaching up to 30 meters and sometimes a little more. Its trunk, cylindrical in shape and smooth bark, is about 3 meters in diameter and produces highly aromatic cream-colored flowers that give rise to ovoid fruits with a high content of vitamin C. It is an endangered species.

The only natural species in Australia, which is also commonly called the Australian boab or baobab , although there it is also called the dead rat tree or bottle tree, due to the shape of its trunk. It reaches heights of up to 10 meters, with a trunk that can exceed 5 meters in diameter.

It reaches heights of up to 25 meters, although the usual thing is that it stays well below it, reaching its trunk a thickness of up to 6 meters or more. Its flowers are pink, and it stands out for being able to enter the sea a few meters.

Another species that, like the previous one, is typical of Madagascar, and of which very few specimens remain, as it is in serious danger of extinction.

The smallest of the Adansonia is a tree that is usually found at heights of around 5 meters , although it can quadruple this measure in some individuals. It is known for attracting lemurs, who come to feed on its fruits.

It is popularly known as the Suarez baobab and is in danger of extinction. Its trunk is quite thin for a baobab, growing up to 2 meters in diameter, and reaching heights of up to 25 meters.

With a cylindrical and irregular trunk, it reaches 10 meters in diameter and 30 meters in height. The baobab Adansonia za flower is orange in shades and appears in spring.

After knowing all these species of baobab, we advise you to read this other article about What are trees, their characteristics, types and parts .

These are the main characteristics of baobab trees :

Where do baobabs grow

To discuss where baobabs are found , we are going to divide them into three main groups:

Therefore, you can see baobabs in Madagascar, Australia and in the South of the Sahara that grow naturally.

How many years does a baobab tree live

When rainfall is between 300 and 500 mm per year, and in tropical or subtropical climates with light soil and high drainage, these trees have a life expectancy of about 1,000 years . However, specimens of more than 4,000 years of life have been found , making it one of the oldest trees on the planet.

Finally, here below you will see a gallery of images of baobabs . If you have liked discovering these curious trees, do not miss our article on the Giant Sequoias: characteristics, where they are and photos .